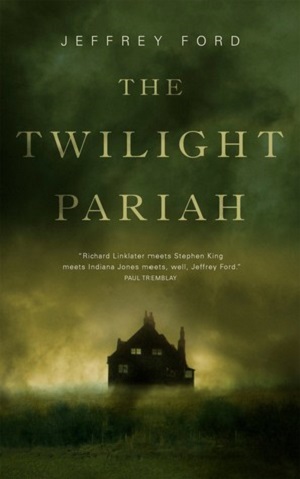 All Maggie, Russell, and Henry wanted out of their last college vacation was to get drunk and play archaeologist in an old house in the woods outside of town. When they excavate the mansion’s outhouse they find way more than they bargained for: a sealed bottle filled with a red liquid, along with the bizarre skeleton of a horned child.

Disturbing the skeleton throws each of their lives into a living hell. They feel followed wherever they go, their homes are ransacked by unknown intruders, and people they care about are brutally, horribly dismembered. The three friends awakened something, a creature that will stop at nothing to retrieve its child.

The Twilight Pariah is a curious beast. It is the story of three childhood friends meeting up during a college/university summer break. Maggie plans to rope Russell and Henry, our narrator, into her amateur archaeological dig, and rope them she does. Things go well until they unearth something unpleasant, kick-starting a series of murders and general spookiness. The problem is that, for a book touted as being scary or creepy, it just… isn’t.

Let’s start with the positive. Ford weaves a nostalgic story around the three friends, adding a layer of wistfulness as they reflect upon how this may be the last summer they spend together. He succeeds in creating a set of believable relationships, evoking the slight melancholy that comes from realising some friendships end as lives take different turns, and that that’s just the way it is.

The relationship that resonates loudest is the one between Henry and his father. Ford delicately creates the sense of being alone, together, yet wanting to connect. It is even more powerful when Ford couples this with the sad realisation all children come to at some point: that their parents will eventually disappoint them. Ford builds realistic relationships, yet others between main and side characters lack depth. This undermines the emotional impact when Bad Things happen to those around the overly-curious trio. The Bad Things are thus predictable as the reader quickly recognises that these side characters are, essentially, disposable plot points.

It is worth pointing out that the book is an enjoyable enough read. There are some genuinely funny scenes as the trio banter, even some laugh out loud moments. The dialogue is sometimes clunky, but the three protagonists are likeable as they stumble through the plot. However, there is also the sense that this book has been badly mis-sold.

A reader could understand some of the comparisons made to Stephen King (nostalgia combined with horror or dark fantasy is a common theme). However, this is the part where the book fails. The discovery of what sets events in motion is truly unsettling, but it is the only such disturbing moment in the story. There are attempts to build suspense as things go missing and there are several bumps in the middle of the night. The problem is that the “monster” is seen too soon, and easily escaped.

There’s a common trope in cinema where the filmmakers hold off on showing the creature in their movie for as long as possible, with this “monster delay” increasing tension. However, this early confrontation cements it as real, removing the thrill of discovery. Compounding this, the exposition is awkwardly revealed, with pages full of info-dump towards the end of the book. It lands heavily and sits there in the middle of the narrative like a somewhat embarrassed elephant in the room.

Without wanting to go into spoilers, the Twilight Pariah itself is not very frightening. Yes, the beast cuts a swathe of violence through the story, as the book blurb gives away, but it often involves characters in whom the reader has no emotional investment. Scenes where the Pariah is confronted aren’t slowly built, they just happen, like a jump-scare. It feels like Ford was aiming for an IT-vibe, as old friends band together to fight some unnamed evil. Instead, reading about these crazy kids stumbling around decrepit mansions and unearthing revelations feels less like Stephen King and more like Scooby Doo, albeit with added dismemberment.

The Twilight Pariah suffers from trying to be two things at once and failing at establishing itself as either. On one hand, it’s a story about growing up and away from the people we love. On the other, it wants to be a dark tale where a “terrifying” evil threatens these fragile relationships. The problem is that, whilst you may care for the three main characters, there isn’t enough depth in their relationships with others (save Henry’s father) to have an impact when those around Henry, Maggie and Russell start getting attacked. There simply isn’t anything that gets under your skin and the terrible things happen to characters whose only purpose is to be cannon fodder. Nothing about the Pariah feels truly dangerous because of this and, if you’re writing a book sold as creepy or scary or even just “dark”, that’s the one thing you really need to get right.

Writing more as and when I can! Currently studying Creative & Critical Writing, my focus in on short fiction View all posts by angiewenham

Hi! I write short stories that focus upon themes of belonging and isolation, and I’m fascinated by how we use horror to explore these ideas. I try to bring in elements of my lived experience as a disabled, mixed race person to my work.

When I’m not doing that, I’m studying an MA in Creative & Critical Writing, or investigating the latest Dragon Age 4 update.

In the past, I’ve written reviews for Women Write About Comics , Sidequest, and Popularly Positive (you can also find info on their sites about how to pitch to them!)